I don't even want to know

It's been an odd week.

First, there's been the whole no kid thing. Then there's been the whole restaurant thing. I swear, I've eaten at my house maybe twice this week. Well, aside from breakfast, which I always have at my house. Mostly white peaches because they're in season and they're amazing. 3 or so, peeled and sliced. Eaten with a coffee with a spoonful of ganache because white peaches prefer mochas to lattes. Who knew? Anyway, I keep running (gently) into various people I haven't seen in a while and they keep saying, 'Hey, let's have lunch/dinner,' and I follow.

Then there's the whole kitchen thing. A friend, and a new friend, and some friends of theirs are at my house right now, being whimsical fairy like and overwhelmingly generous and transforming my very sad kitchen into something bright and cheerful. I'm not even allowed to return home until 4:30 because apparently all that iridescent fairy magic would blind me - kind of like the eclipse - you can't look directly at it and all that.

And then there's the odd piece of advice from the oddest source. I informed someone of some recent changes in my life. Someone actually said, 'Nicole, keep a stiff upper lip.' Really, what else does one do with an upper lip?

And then there's the whole sweet thing. The universe is being very, very sweet to me this week. Not that it's usually mean but you know, sometimes lessons are given with shoves or pushes or elbows in the ribs. This week? Not at all. Starting with the mechanic and ending with the most hilarious scheduling comedy of errors (but not really, apparently) I've ever encountered, I've been taught things, brought around to truths with the gentleness of butterfly kisses and cool whispers.

Also the way to do it

a.k.a. forces at work

Apparently I wasn't meant to go to Vannes this weekend.

That's right. No chocolats, no macarons. Which both seem ridiculous when you sit them next to the fact that I didn't get to see the boys and haven't seen them in 9 days. And won't for another 3. A weekend completely devoid of sweetness. Good thing I drank vats of champagne friday evening - I must have been cosmically aware that my sorrows would need to be glazed over. That said, the champagne would've been better saturday night because really, hangovers don't glaze much of anything.

It was 11 a.m. saturday morning. I had just left Laval and was headed for the highway. Then a weird red light (weird because I had never seen that light before) came on in my car. It wasn't for fuel levels or oil even. Just this really menacing red light. I pulled off and turned down a small, dusty country road. I turned on my hazards and popped the hood and tried to imagine what I could do with anything under that hood. Aside from check the oil, not much, it turns out. About 30 seconds later, a car drives by. The car stops, a young man gets out and says, "Ma'am, do you need some help?" I explain about the menacing red light and the mysterious universe under the hood. He goes back to his car and gets a BIG tool box. I ask him if he knows anything about cars. He says he's a mechanic. He does some stuff under the hood and then calls an auto supply shop and asks if they have a part and they do and then he drives me to get the part, which cost me 15€. Then we go back to the car and he changes the part (the temperature guage or something like that which indicates to the ventilator thing when the motor is too hot and it needs to turn on or something like that) and he says 'Have a nice day, Ma'am,' and goes on his way.

Despite the fact that it was fixed I still couldn't go, it had gotten way overheated. So I went back home and felt hungover and sorry for myself (those go REALLY well together).

First stop - the chateau for an evening of wine and Americans, both of which I will enjoy.

Second stop - Vannes for the weekend to see the boys, who are away for two weeks (!!). While I am there I will most definitely toss my wishes into the sea (gulf actually) for safe keeping, and I will also buy some chocolats and macarons at Guerlais et Chartier (25, place des Lices in Vannes) because they're honestly some of the best I've ever had. But I won't buy very many because...I'm reasonable? No, they're just expensive. When you walk into the shop, you feel like you're walking into a very posh jewelry store - it's got that hushed and precious feeling to it. And actually, the chocolates and macarons are displayed like jewels. And for a moment, while you're eating them, you think they are jewels. The macaron au caramel au beurre salé tastes like melted gold should taste. And the dark chocolate with mint ganache tastes like a chocolate-covered liquid diamond would taste. Oh and the coulis de framboise like a mouthful of puréed rubies.

The way to do it

I'm back at the chateau for a few days.

I had a project today - help my friend clean out and organize her dressing room, which was kind of a mess.

I decided the best way to handle it was to take everything out and go through it before putting back the selected items. But that's not really the important part. The most important part was having the right tools. Boxes? Bags? No. Nothing like that. It was coffee and then alcohol and then sugar. So the morning's efforts were sustained by coffees, the afternoons's by a trip to the French version of Goodwill where I found two beautiful chairs for 20€, the evening's by many glasses of champagne, and the late evening's by a big bowl of the sorbets I made for the occasion -chocolate and coconut - becaue one is just not enough.

Cleaning should always be this fun.
Posted by Nicole at 11:49 PM 3 comments:

Yesterday I went to dinner at one chateau and slept at another. Both with four turrets.

I also drank cognac. It wasn't the first time but it had been a long time and I had forgotten how much it tastes like what I've always imagined caramel colored lighter fluid would taste like.

My ideas about cognac may have something to do with why I don't have my very own chateau.
Posted by Nicole at 12:40 PM 7 comments:

When you have kids, you hope for the best, obviously. You hope they'll inherit your good traits, physical or otherwise, certainly none of your bad ones.

Never in a million years would I have wanted for Boy1 to be as hypersensitive as me. And I never would've wished for Boy2 to be as literal as me. I was just kind of hoping they'd both get good grades in school and like math.

On the upside, they both like math. Their favorite 'game' to play is math flash cards.

I cannot imagine what kind of mother would convince her kids that math flash cards were a game.

Or that playing that game in said mother's favorite café every morning is a normal school vacation activity.
Posted by Nicole at 7:11 PM 3 comments:

Labels: whose kids are these?

It's a holiday weekend here. Today's Bastille Day. I'll be going to a party at a chateau this evening and I won't have to cook any food all day. Life's interesting that way sometimes.

My brain-searing headache is back, which is why I've been posting so little. But I'm planning on giving my headache the silent treatment, hopefully that'll do the trick. Why the headache? The jaw. No, not from talking too much. Probably from not talking enough. Or not about the right things. Or something like that. 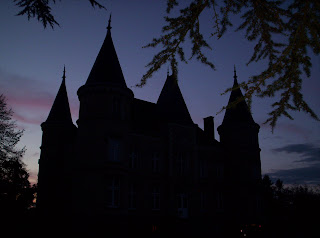 Don't ask me what happened last week, I'm not really sure. It was the last week of school for the boys and I had a lot of work hours (I've got another Quality guy - and you know what that means) and chocolate covered toffee to make for 10 (teachers and assistants) at the boys' school and I don't even remember what else.

So, to celebrate the start of summer vacation and as part of our mini 4th of July party (just me and the boys and a batch of fried chicken [homemade]), the boys each baked and decorated a cake. And, as usual, the were totally moderate when it came to the decorations. I made chocolate frosting, which the applied liberally. Then they wanted to color something so I made a batch of buttercream frosting and they colored it and piped it on. And then, of course, sprinkling things was absolutely necessary. So they sprinkled. 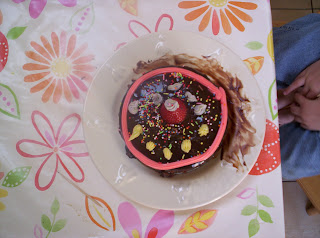 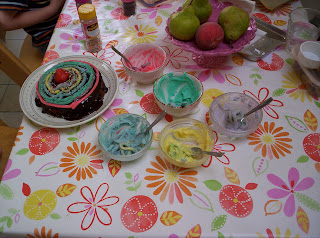 And topped it all off with a strawberry.

Actually, when you think about it, everything should be topped off with a strawberry.
Posted by Nicole at 9:19 AM 3 comments:

Me as I really am